“Project his esteemed majesty at any cost.”

6m to the shoulder

Royal Alcanti Guardian X1-C (also known as Royal Guardian, X1-C or Guardian X1-C) is a bionic construct designed as a throne room boadyguard to the Paragon of the Draconid Imperium. Originally commissioned in ID.219502 and composed of artificial muscle tissue connected to a monopolium-core skeleton, the guardian's purpose is as a final line of defence for the paragon should even the Blood Dragons cannot contain a threat.

As far as anyone knows only one GUrdain is operational, afectionately named "Aegisilos" by it's first and so-far only charge: Paragon Uriel Ultanos.

Guardian's origins began, quite convenently as a statue. Since ID.216573 a dragon of identical design ot X1-C has stood as a symbolic warden of the imperial throne, resting behind and just above it protectively.

During the Battle For ALcanti in ID.219495, Uriel Ultanos was fatally wounded in his own throne room by a demonically-empowered Volkarus Khaxvis. The intervention of Tyraz and Iovera IX saved the paragon's life. In the later years of the war, worried that his life would be threatened again, Erias Ultanos, one of Uriel's older brothers, approached the Royal Academy requesting something of a supreme guardian to safeguard the Paragon in case another incident occured.

Under his request, the Royal Academy engaged in a five-year projet known as the Project Serenity where a prototype automaton was designed from the ground-up. Erias had insisted the form of protection should be concealed somehow and after several conepts, it was decided for both adaptability and flexibility, the automato nwould rpelace the dragon sculpture behind Uriel's throne.

Erias poured considerable funding into the project, allowing sicnetists access to the best technology in Andromeda and the burgeoning Andromedan Galactic Commonwealth. The end-result of Project Serenity, analyticalyl dubbed "X1-C" met with approval from Erius as well as several Ultanos dignitaries in ID.219502, later installed two weeks later after it's unveliling to the Paragon.

SInce its installation, the automaton, which Uriel named "Aegisilos" out of affection, grew to understand it's operational paradigms but has yet to see active use as Uriel's life has not been seriously threatened in his own home in the years since its activation 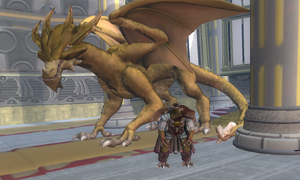 From base to shoulder, X1-C measures in at six metres in height, with an extra 2.5 when the head is at rest. The body is plated in regenerative ceramic armour using onboard fabricators and is powered by three zero-point modules along its spine, which can cover power flow should one or the other two be disabled. The skeleton is made from a shielded monopolium core surrounded by nanoalloyed carbon fibre and titanium-tungsten alloy which allows the frame to withstand several hundred tonnes worth of pressure per square inch before fracturing. This frame strength also allows it to eliver blows strong enough to destroy structures and armoured vehicles wien anough velocity is applied.

The synthetic muscle wrapped around its frame can deliver 20x the force per square centimetre as organic skeletal muscle, giving it immense strength to allow it to shift its massive frame as well as deliver building-crushing physical blows. Its claws are tipped with ultrahard carbon compounds that give it a greater cutting power than graphene. BUilt within the feet are nanofabricators designed to assemble picomachines that are secreted onto the claws. When these claws come into countact with Essence-conductive material such as organic tissue they act as a dampener, weakening essence-sensetive entities and making them more vunerable to physical attack.

Built into the mouth of X1-C is a tau particle cannon and built into the eyes are a pair of laser emitters. X1-C utilises two AI "brains": A core brain in its abdomen and a secondary brain in its head. Because primary functioning takes place in the abdomen, X1-C can still perform essential functioning even when decapitated. Both brains use prototype quantum substrate matrices making it vastly more intelligent than any non-augmented organic opponent and is capable of learning from its opponent withi na few moves. While unable to speak on its own, X1-C uses a transmitter link to the Imperial Throne, allowing it to speak in a pseudo-telepathic way to whoever bears the paragon'sseal. THis transmitter can also hack into other implants allowing it to contact or even interface with other cyborg or automaton opponents. A dedicated 10 exabyte holographic storage unit allows it to store faces and profiles of over thirty billion individuals along with relevant profile information, analythics and behaviours.

Guardian X1-C has a deep-code directive to protect the paragon at any cost, including the option to risk its own destruction to keep him or her safe. X1-C is deepc-ode programmed ot recognise the paragon using two factors: The first being recognising the signet ring of the legitimate paragon and cross-reference the face of the person it detects with the uploaded profile of the paragon. A DNA-analysis algorithm also means it extends its protection directive to other memebrs of the paragon's family.

When active and when confronted with unauthorised personnel, X1-C wil display defensive posture, threatening the target to leave. Unless the target acts with extreme hostility or attempts to attac kthe guardian, continued defiance will prompt it to pin the threat to the floor and contact nearby Blood Dragons. Being a machine, X1-c posesses an eidetic memory and stores profiles and imprints of all contacts it sees, it also stores analytical information on each contact.

WHen the paragon is not under any threat, X1-C enters a "dormant state", assuming its disguise position behind the Imperial Throne of Alcanti wher it sits immobile and running on minimal power. Even while in this state however, X1-C still records and analysis any entrants to the throne room in case the need arises for the threat to be disposed of and only usualyl comes online at the paragon's command via a singal from the signet ring.

When in battle X1-C will prefer close-range attacks and uses its Tau particle cannon for distant targets and its eye-mounted lasers for medium-range and close targets. Whatever chance it has it will seipe at a target with claws coated in essence-dampening picomachines that will hamper the essence abilityies of any infectees should they not be completely torn apart instantly. These machines can also allow it to interface with cyborgs and deabilitate an opponent regardless of essence potential. It will normally spend a short while analyisng its opponents behaviour, stance and attacks before consider a way to counter and eventually overwhelm an opponent's abilities. This same intelligence along with an analysis of a target's anatomy also allows it to effectively target the most vunerable parts of the body and the most effective attack points. On larger targets it will use its sheer mass and brute strength to create an opening.

“++PRIORITY DIRECTIVE:NOT TO BE HARMED++”

“A powerful and dutiful protector. Also I have to admit, it is something of a gentle giant around me”

“Aren't you one adorable merciless killer!”

Retrieved from "https://spore.fandom.com/wiki/Captain:Alcanti_Guardian?oldid=769430"
Community content is available under CC-BY-SA unless otherwise noted.