Humanity deserves better than division. We must learn to accept our differences. We must embrace them.

“A clever diplomat, driven by love for his people and dreams of unification between his kin.”

Aidan Collins (Irish: Aodhán Ó Coileáin) was a Human male diplomat, poet, sociologist, author and human unificationist active within the Allied Terran Republic. Born on Earth before its abandonment, Collins eventually came to the conclusion that in order to secure humanity's place in the galaxy and beyond, they would need to put aside their differences and begin acting as a fully mature space-faring species.

Collins' charisma, ambition and interest in humanity's fate as a species make him a rising star on the political stage, even attracting the attention of various alien civilisations which also supported the unification of his species. As he grew older however, Collins began to grow increasingly disillusioned with unification and instead began to favour cooperation with alien civilisations over non-Terran human factions. Collins served as a councillor and diplomat in the Terran Republic, where he successfully campaigned for the Republic's membership in the Mou'Cyran Accords, and later, the United Gigaquadrantic Alliance, which he served as President in 2810.

During the Second Great Cyrannus War, which soon spread to the Plazith Rim, Collins supported the New Cyrannian Republic unreservedly, and advocated for intervention in the conflict. However, this would, in turn, attract the baleful eye of Emperor Tyrómairon. Two Terran years after the beginning of the war, the Empire attacked the Terrae, revealing that President Elethien was a Bisistar and dissolving the Terran Republic. In his final moments, Collins spoke out against the Emperor to his face, and was choked to death by way of the Emperor's powers.

Born in Galway, Ireland in the European Star Republic in 2770, Collins grew up in a time of great change for his people and his planet. Due to the invasion of the dreaded Neanderthal, humanity was forced to abandon Earth to settle in its various interstellar empires. However, though his family managed to live in secret from the Thals, the ancient menace managed to kill the young boy's family as they attempted to escape Earth.. Even from a young age, the division of Earth and Humanity made little sense to the young boy who grew up hearing stories of fantastic alien civilisations made up of many dozens of species for a common goal. Growing up on Europa 1, the space-faring capital of the European Star Republic, Collins grew up with a good education but was horrified to see the countless conflicts that existed within his species and by the time he reached adulthood, he pledged to make his life meaningful by devoting it to this noble cause.

By the time he finished university, Collins was already a noted poet and scholar, specialising in non-fiction considered by many critics as having contributed greatly to current political events and developments. By his twenty fourth birthday, he had published articles on ideology, sociology and the development of literature over time. However, he soon began to focus on his political life once more. In 2794, Collins and many of his supporters joined the diplomatic corps of the Allied Terran Republic, hoping to end human division and bring about a truly united and strong human civilisation bound by the principles of liberty, culture and freedom. This stance bought Collins a great deal of admiration both among his species, the Kindred Coalition and the various civilisations in the cosmos that view human unification as a positive step.

Within the next few years, Collins' political stature increased tenfold, with the aspiring diplomat meeting with leaders of civilisations which overshadow the power and majesty of known civilisation. Collins eventually gained a meeting with Proconsul Apollo of the New Cyrannian Republic and Ramashe of Rambo Nation at the Cyrandia Conference. The Proconsul warned the young human that the road to peace would be a bumpy one with much heartache. These high-status meetings with such influential Gigaquadrantic figures ultimately led to more meetings with famous leaders from across the Milky Way such as the all-powerful Emperor Wormulus II of the Delpha Coalition of Planets, who pledged the support of The Civilisation.

During the New Cyrandia Wars, Collins, escorted by Admiral Juliana Reynolds of the ATS Leonardo da Vinci, travelled to the Quadrant Galaxies where he represented the Terran Republic at a Conference at Lianna to request space for colonisation in the Cyrandia Cluster as well as a military alliance with the New Cyrannian Republic, the Empire and Rambo Nation. After the meeting, he became smitten with the Marscalcus of Rambo Nation, Kya. Though the Quadrantia Human was initially distrustful of him, the two spent the rest of their time on the station overlooking the wormhole to Cyrannus, as they chatted about their culture and empires. After the meeting, he returned to Terrae, hopeful that he would speak to Kya again. Almost a year later, Collins was chosen to represent the Republic when it joined the Mou'Cyran Accords, making him a well known face to the myriad of empires already within the noble alliance for peace and order.

When the Orion League fell to the Delpha Coalition of Planets, resulting in the formation of the pro-unificationist Human Superstate, Collins surprised many when he spoke out against it, claiming that such a state formed under foreign duress would not truly embody the cause for human unification. As such, he successfully argued in favour of neutrality for the remainder of the Great Xonexian Schism.

“We will fight you down to every last world if we must. We believe in self-determination, not humilation. May this day be remembered as the one your grip begins to faulte-”

- Aidan's last words, before being killed by Tyrómairon

When the Second Great Cyrannus War erupted in the aftermath of the Mou'Cyran Cataclysm, Collins successfully campaigned for Terran aid to the beleaguered New Republic. He worked closely with President Elethien throughout the conflict, even as it spread into the Milky Way. During the Fall of Terrae, Aidan was horrified to discover that President Elethien was secretly a Bisistar infiltrator, and was almost killed by her before the reptilian was incapacitated by Imperial Grand Admiral Daeron Siruliulus.

Ostensibly agreeing to surrender to the Imperials, three days later, Aidan was forced to speak before the people of Terrae and capitulate to the Imperials. When he began to speak, his eyes became fixed on a young girl, and spoke his last words, calling on all Terrans to rise up and rid their world and their republic of the Empire's influence. Pointing directly at the hologram of Tyrómairon, Aidan predicted that this day would mark the beginning of his downfall, only for his words to cease when the Emperor telekinetically snapped his death.

In death, Aidan was remembered as a martyr among those Terrans who refused to submit to the Empire—a great man who refused to bend before a great evil.

Among humans, Aidan Collins was considered attractive, being of medium build, bright green eyes and dark brown hair. Always appearing in public well groomed, Collins was often seen wearing a humble suit that doesn't reflect any particular ethnic origin among the people of Earth. The reason why Collins did this was to portray his sense of solidarity with the human species as a whole, not a particular cultural group.

“A clever diplomat, driven by love for his people and dreams of unification between his kin. And good looking!”

Aidan Collins was called by many as one of the most charismatic and thought-provoking humans in recent history. Though born in an era of tremendous strife for those living on the Thal-occupied Earth, Collins learned from an early age that one of humanity's key problems was their lack of unity. A deep admirer of the various human cultures, Collins believed that instead of using differences between different groups as a means to wage conflict, that these differences should instead be celebrated.

However, beyond the public face of the man called by some as humanity's champion on the intergalactic stage is a figure of great sadness. As a young child, his family was brutally killed by the occupying Neanderthal force, leaving him with a difficulty to make new friends or romantic interests. Nevertheless, upon meeting Kya of Rambo Nation, the two fell quickly in love. However, most who knew him personally have commented on Collins' wit, intelligence and politeness.

“These lads are great, I'd be lost without them.”

“How are you doing?”

“It is seldom that I meet a figure with such conviction. Humanity is lucky to call Aidan Collins one of their own.”

“Ambitious, determined, and resourceful. I can tell he is one who would pursue his dream to his dying breath. I will watch closely, to see if he follows the advice he has been offered. For all the knowledge in the universe means nothing if it is not used.”

“Young. Naive. How can mankind thrive when it only unifies at the behest of aliens?”

“It takes men like him to remind us that we have responsibilities that transcend our own national interest. But I don't share his optimism, I am sorry to say. Humanity is too fractured, too different to act as a single, unified whole. Men like him often point to common human action during the Dominatus War as a sign that this is possible. It's a pleasant thought, but did we act out of hope for a better future then? I remember vividly: We acted out of fear.”

“A clever diplomat, driven by love for his people and dreams of unification between his kin. And good looking! Giggle”

A full body image of Collins. 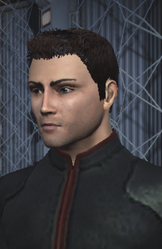