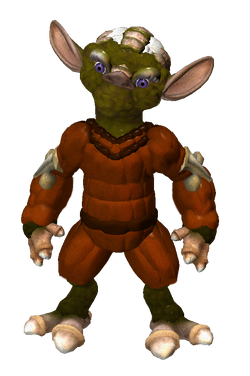 “Through Valin'uvalyë, we are all bound together. What we do to one, we do to all.”

Aenaró is a Yodian male master of the Aldárae Order, revered across the Cyrandia Cluster for his deep wisdom. Originating, as with all of his people, in the Quadrant Galaxies, Aenaró was descended from those scattered when the Quadrantia Grox annihilated the Yodian civilisation. Born in 655 BNE, Aenaró was one of the first Quadrantia beings to travel to the Cyrannus Galaxy, where he spent decades travelling the Outer Rim, before being called from beyond the stars by an unknown voice. Seeking out the presence, Aenaró happened upon Aldár, where he was trained in the ways of Uvalyë by Master Du'utahrovin.

Becoming the foremost expert on the lore of the ancient Oikoumene and the original Aldárae Order, Aenaró travelled across Cyrannus and into the darkest reaches of Endless Space, seeking to understand the mysteries of the Light. During the Cyrannian Cold War, he aided Master Ryen and his pupils Aoirtae Valaeris and Kara Inviá in their attempts to restore the Aldárae, and in so doing, bore witness to the return of Apolithanatár, the Lord of Light, and the outbreak of the cataclysmic Second Great Cyrannus War. During the war with the Galactic Empire of Cyrannus, Aenaró aided the New Republic directly, taking command of entire fleets during battles against the Empire.

Aenaró's early history is shrouded in the unknown reaches of the past, though he attests to the fact that he was born six hundred and fifty five years prior to the rise of the Empire. Born in the Quadrant Galaxies, and descended from those Yodian who fled the destruction of their civilisation by the Quadrantia Grox, Aenaró spent the early years of his life on the starships of his people, aimlessly floating from world to world. When he came of age, Aenaró took off on his own, seeking to make his own adventures to add the annals of his kin. Travelling into unexplored Quadrantia space, he eventually came across an anomaly which transported him to the nearby Cyrannus Galaxy. There, he disappeared into the Outer Rim, learning of the lore of the Oikoumene and the histories of the First Republic and its fight against the Phaedra and the Nagith Empire.

As he neared the end of his first century, Aenaró heard a distant voice calling to him from across the galaxy. Seeking out the voice, he travelled into the Unknown Regions, where for months he contended with hostile aliens and spatial anomalies until finally happening upon Aldár just as his ship's fuel supplies became fully depleted. Eventually, he learned that the voice was that of Master Du'utahrovin, who began to train Aenaró to hone his inborn skills in harnessing the mystical power of Uvalyë. Training on Aldár for decades, Aenaró eventually bid farewell to Du'utahrovin to once again travel the galaxy, seeking to expand his knowledge. During this quest, he debated spirituality with the Iereísi Dukes of Hirana, meditated with the Oiseauian High Nests and studied with the scholars of the Great Library of Apailiana. During this time, he clandestinely began training others in the way of the Light, including Daera Rosalayne.

With the rise of the Galactic Empire of Cyrannus, Aenaró felt that his connection to the Light had been darkened by Tyrómairon's rise to power, and when the Empire seized the Library in 01 NE, he fled back to Aldár to commune with Du'utahrovin. There he remained until finally, he met with the young Aldárae student called Aoirtae Valaeris, who was being trained by Aenaró's fellow Master Ryen. Accompanying the young woman on his trek to meet with Du'utahrovin, Aenaró felt that the young woman held the hopes of the galaxy on her shoulders, and predicted that she would play a key role in the triumph of the Aldárae over their dark foes. However, he expressed scepticism when Du'utahrovin claimed that Aoirtae held the key to resurrecting Apolithanatár.

Waiting on Aldár as his new allies travelled to Aecor to retrieve the Zevian Skull, Aenaró was shocked when a dark alliance led by Venatorius and Morgandaûr invaded the Aldárae Temple. Outmatched by their sheer numbers, Aenaró nevertheless held them off as best he could, and when dueling alongside Ryen, managed to hold his own, and nearly defeat Morgandaûr, before being seriously injured by Lana Yrel. When he awoke, he was shocked to discover that Aoirtae had struck down Morgandaûr, ending his reign of terror once and for all. However, she had also used the Zevian Skull to travel to Apolithanatár's dimension, from whence she would not return for over two years. When she did, Aenaró welcomed her back to Aldár, and bore witness to the official formation of the Aldárae Order.

With the destruction of Mou'Cyran and the outbreak of the Second Great Cyrannus War, Aenaró agreed with Master Alinor Nanuq that the Order would need to take a direct approach to the conflict, bringing the Aldárae ever closer in league with the beleaguered New Cyrannian Republic. Travelling to Capricaerón, Aenaró began working closely with Fleet Admiral Willelmus Cretacea, working to prevent the Imperials from invading the Capricorn Sector. By 17 NE, Aenaró had returned to Aldár, where he, along with many members of the Order witnessed the return of the Oikoumene known as Chaneonix, who informed them of the Spear of Ramielum—an ancient weapon capable of destroying the Corruptus demon known as Mar-Júun.

In 20 NE, Aenaró was present during a meeting of the allied commanders on the Republic flagship Resolute, during which President Apollo proposed an immediate strike on the galactic capital Orbispira, hoping to liberate it from Imperial rule and end the reign of Tyrómairon. Participating in the Great Battle of Orbispira, Aenaró landed on the surface of the planet alongside the other masters of the Aldárae Order, and incapacitated the rogue Phaedric Lord Ruuvitharn, allowing Caranye Valaeris to kill him. Afterwards, Aenaró participated in the great charge against the Empire's final defenders, and when the fighting had ended, watched as Apollo picked up a Republic flag and waved it above the battlefield, signifying the planet's liberation and the beginning of the end for the Empire.

Affable, eccentric and intensely intelligent are just a few words to describe the enigmatic Master Aenaró. Indeed, though diminutive, Aenaró is considered to be one of the most powerful masters of the Aldárae Order, capable of holding his own against foes as supremely powerful as Morgandaûr. Aenaró is often well regarded by fellow members of the Aldárae Order for his kindness and generosity. Prior to the outbreak of the Second Great Cyrannus War, Aenaró's favoured hobby was to venture off into the wilderness of Aldárae for weeks on end, strolling and meditating amongst the trees, or on the banks of rivers, or on the peaks of mountains. When back at the Temple, Aenaró was also fond of baking, and made a habit out of making a cake whenever a member of the Order celebrated a birthday. A traditionalist, Aenaró takes a hardliner approach against the Empire and the Phaedric Order, believing that the only way the war can end is with the total collapse of the Empire.

“May you find peace in the Light.”

“Jeez! Don't sneak up on me like that, lil guy! I almost took your head off!”