Admiral of the Vartekians and the Galactic Empire of Cyrannus

“If one is to lead his people he must not drive them but instead earn their respect.”

Votarah is the strongest and and most fearless captain of the Vartekian Empire and one of the Grand Admirals of the Galactic Empire of Cyrannus. He is one of the most ruthless and intelligent captains in his galaxy. Votarah is a well respected strategic and military mastermind who fights with honor dignity and nobility. He is vastly powerful and has conquered 2000 planets for his empire.

He is well known for being the only Vartekian captain to settle disputes diplomatically first. Votarah is vastly powerful and anyone who apposes him is in immediate danger. He has won many wars and many missions. Votarah was responsible for inventing most of the things Vartekians use in their military. He has also designed many colony buildings used by the Vartekian race. You can read about his journeys here.

Votarah became Captain when he was only 20 years old. He was elected by lord Vendora. The new lord of the Vartekian empire was Sataraura. Soon Votarah came across a totally new species which held a surprise for him: the Terragriff. Votarah and his small fleet attacked it, conquering an entire galactic arm before he and his 200 soldiers were defeated. The lord of the Terragriff was impressed and spared Votarah's life. Soon Votararh was able to make an alliance with the Terragriff and the two empires conquered more and more empires.

Votarah has had a hard and long childhood. He was constantly working and being educated... he had no time for any socialization other than his childhood friend Saphiria and Telade. He and Saphiria would play for hours in the colony field and would often run around the city saving kids from the local bullies.

Saphiria was also responsible for electing Votarah as a captain and shaping him into the honorable fighter today. Saphiria and Telade both helped Votarah to rid the streets of gangs. Telade also taught him strategy and because of her Votarah was able to become such a successful captain. One unfortunate day the Grox attacked the Vartekian colony and Saphiria helped lead a bunch of captains in training to defeat them with Votarah along her side.

He helped protect them during the attack but failed to protect Telade when the grox captured her. Votarah later retaliated against the Grox but he did it in justified means because of his code of honor taught him to never fight with vengeance.

Over the years that followed Votarah gained much recognition from the captain's academy. Before graduating year he re-designed the captain's uniform, giving them shields, slip knives, wrist blasters, and the rocket launcher jet pack.

Soon after the Terragriff alliance Votarah set up the mighty Confederation of Vartekia. Many wars past as Votarah fought and conquered more. Soon the Vartekian empire completely dominated. Votarah's conquest did not stop there. Soon he set off to conquer the sector of Bodes. Bodes was more primitive than Andromeda and the empires were easily defeated.

Later Votarah discovered very powerful empires of the Milky way galaxy to their empire. After lord Sataraura died many of his people began to rebel. Votarah slaughtered the rebel leader and imprisoned the rest of them. Soon after, the chaos stopped when lord Covaitan stepped up to the thrown. Now Votarah is good friends with Covaitan.

Captain Votarah had captured thousands of systems and fought in many wars. He has shown courage, bravery, and honor in battle and has represented his empire on many occasions. For all of his efforts to his people Votarah was eventually promoted to the rank of admiral. He is now head of the military along side his friend general Saphiria. The promotion took place on his homeworld colony on Xandrala. The entire empire along with many others watched as Votarah was given a special crest symbolizing his rank as admiral.

In the many years that followed Captain Votarah fought various wars. Including the War of Ages, Trucinex War, Intergalactic War, Delpha/Loron War, and quite a few others. Votarah's war experience is quite vast from the previous ones as well. All this later lead him to start writing a novel. It would be about his journeys and experiences. It would also include the strategies he used in hundreds of battles. Votarah and Saphiria were also united. Together they helped to expand the Vartekian empire and it's influence.

Increasing relationships between the Vartekian Empire and the Mortalitas Empire grew so high that they eventually joined the Confederacy of Allied Systems during the second year of the Great Cyrannus War. However, the Vartekians themselves did not wish to battle, instead infiltrating the United Republic of Cyrannus.

When the URC and the CAS merged to form the Galactic Empire of Cyrannus, the Vartekians were delighted to once again become a member of such a large and mighty nation. Votarah became an admiral in the Empire, while being allowed to keep his mighty ship and crew. He also became allies with Zillum in this time. Now, Votarah patrols Imperial space, destroying rebels where he can.

Votarah has extensive talent in almost every form of combat. He has been trained to withstand many poisons, torture, heat and cold weather conditions. He was trained under the former captains of the Vartekian empire and has been revived from death many times. He has also been trained to lift 3 times his body weight. He was also educated and schooled for 120 years. Votarah has even worked through politics and learned more than 300 languages. He also trained in combat and has mastered both Vartekian martial arts, Judo, Kendo, kung fu, Fistome, and many others.

While in the Vartekian captain academy Votarah also practiced his acting skills and starred in a number of movies. His first big movie was Mardan which was not the best movie ever. Mardan was shortly followed by Votarah. This however was better than Mardan but still lacked good quality. His most famous movie was Operation Dragon Claw which he directed. It was a brilliant movie and told the story of the war between the Capricorn Sector Alliance and the Vartekians. Votarah has now finished a long awaited movie called titled The Knowing. It became an instant hit and blew it's way through the MPN. The movie is based on the Intergalactic War and is filled with action and suspense.

Votarah is a very complex character. He is cunning and manipulative; both of which saved him from death many times. He is often referred to by his fellows as "The Mountain."

He is unbreakable and will hold his ground without hesitation. He is also known for his bravery and strong sense of honor which has separated him from most of those within the Vartekian military. However, Votarah also has another face to his personality: deep within his character is a ruthless demon which burns with hatred and aggression. Despite this Votarah has been able to control this effectively.

“We shall fight alongside each other in honour.”

“You will die by my blade.” 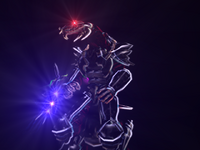 “I have heard of his prowess and his strength. He is not to underestimate, as I know he is a more-than-formidable enemy,”

“Votorah, take me under your wing!”

“Not many mortals come like him these days... a shame.”

“A cunning and clever captain, he is the most famous and infamous Vartekian the Rambo ever encoutered. His skills were impressive and he save my life once during the March of the Apocalypse. Even though our Grand Nation considered them an enemy due to them attacking our ally, the URC, I began seeing Votarah as a great and honorable warrior, which I wouldn't want as an enemy!”

- Captain Ramcard of the USS Dallas.

“Evil One! Teach Me and I will Learn!”

“Captain Votarah, Your skill in war is unmatched! join me and Saphiria for dinner and we will see your card skills!”

“A brave warrior, and honourable too. A few minor character defects here and there, but all around, the Captain I want in the foxhole next to mine.”

“How about you and I spar some time soon, after I regain my physical form.”

“Though we've never met, I respect Votarah. While he may be evil, to a point, I admire his skills and prowess. I hope to one day put those skills to the test.”

“They say he's a great warrior, but I'm yet to see him in battle.”