Bloato is a Maxis-made cell appearing in the Cell Stage at Level 5 in Spore. It is one of the last of cells appearing in the stage and predator-sized cell, tied with Snorf. It doesn't attack or get attacked by Snorfs.

Unique parts that can be harvested from this creature[] 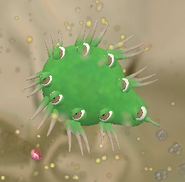 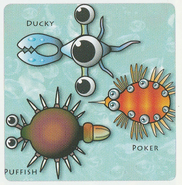 A previous iteration of Bloato. It is labeled with the name 'Poker' similar to how it was described in the game files, along with an early iteration of Puffish and Ducky.