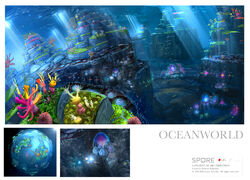 Aquatic Stage is an unreleased and removed stage in Spore that was originally going to be included but did not make it to the final game.

During the SXSW 2007 demo, Will Wright said that the underwater phase was on the verge of being cut out. He also said that, if cut, the aquatic stage would be one of the first things to add via an expansion pack, though ultimately no such expansion was released.

When Spore was being developed, underwater civilizations were proposed. In the Tribal stage, players were able to place their village underwater to start an underwater tribe. In the Civilization stage, you would be able to make underwater cities, which could produce submarines and similar vehicles. It is unknown if being able to make your spaceship dive underwater was ever considered. The underwater cities and the idea of villages didn't make it to the full game due to animation problems. You can, with terraforming, put tribes underwater, but they just swim above the water.

In the aquatic stage, there was going to be a vast world with giant underwater mountains, deep trenches, underwater plains and hills. There were going to be underwater ruins as well. Despite some rumors to the contrary, aquatic civilizations do not exist in Spore. However, Will Wright has hinted that underwater civilizations may appear in an as-yet uncompleted expansion pack. It is, however, possible to build vehicles that travel overseas.

These rumors come from the GDC '05 Spore Demonstration where, as he builds a city in a bubble in space, Will Wright says that "about this time we could build cities in these bubbles underwater". This was removed however due to unknown reasons.

After the full release of Spore, there is no Aquatic Stage included in the game, other than the Cell Stage being the only stage to play underwater and arguably the substitute for Aquatic Stage. However, there was a plan to include Aquatic Stage into a full game via expansion pack, shown by an advertisement titled "The Depths", albeit it was never publicly announced.